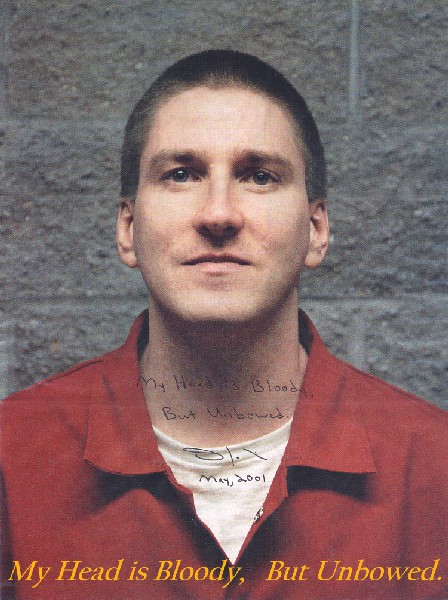 Out of the night that covers me, black as the pit from pole to pole.
I thank whatever gods may be for my unconquerable soul.

In the fell clutch of circumstance I have not winced nor cried aloud.
Under the bludgeonings of chance my head is bloody, but unbowed.

Beyond this place of wrath and tears, looms but the horror of the shade,
and yet the menace of the years finds, and shall find me, unafraid.

It matters not how strait the gate, how charged with punishments the scroll,
I am the master of my fate; I am the captain of my soul.

Though not the words of Timothy McVeigh, the Outpost of Freedom will be presenting a series of articles about McVeigh, the events that lead to his execution and where we should go from here. The Outpost of Freedom has endeavored to understand the philosophy of Timothy McVeigh and will present this information as it perceives that Timothy might have presented it, himself -- given the opportunity.

Though there have been many who have tried to put words into Tim McVeigh"s mouth, there have been very few words which have come out of it. Tim has not sought a soapbox upon which to stand – to shout words to those who might be listening. Instead, from the moment he was arrest, he has chosen to minimize the content of his orations.

At sentencing, he gave but 47 words to an audience that had expected a proclamation of innocence, or guilt. Though guilt was directed, by those few words, it had nothing to do with his innocence, or guilt. It was a damnation of the US government, and the practices that it has used to decimate the concept of self-government, which our forefathers had chosen as a means to rid these shores of the tyrannical government of the Crown.

These pages are an effort to convey as much as possible of what Tim would like us to heed. Though the words are, most often, the words of others, every effort has been made by the Outpost of Freedom to assure that the selection is that of Tim’s choosing.

In each case, an introduction will provide the source, and the background of the information presented. In some instances, the information may be subject to copyright laws. It is the responsibility of anyone who copies any information from these pages to assure their right to reproduce that information, or defend, as necessary, their so doing.

The Outpost of Freedom has begun corresponding with Tim McVeigh. Information received directly from Tim will be so identified. Other information, from other sources, will, likewise, be identified as such.

On August 14, 1997, Timothy McVeigh stood before judge Matsche in a Denver, Colorado federal courthouse. The judge had given McVeigh the opportunity to speak (what used to be termed allocution). McVeigh, as the world listened, had only 47 simple words to utter. What did Timothy McVeigh Really Say? suggests that what McVeigh had to say was much more profound than many realize.

Later, Timothy McVeigh,  wrote an essay, "An Essay on Hypocrisy", which explains his beliefs and adds his perspective to current world situations.

On April 23, 2001, Rita Cosby, of Fox News, received a letter from Tim McVeigh. There has been some concern as to whether that letter was really from Tim McVeigh. Rita has graciously provided Outpost of Freedom with a copy of that letter so that each might judge, for himself, whether it is Tim"s work, or not. The Outpost of Freedom believes that the letter is from McVeigh an  accurately reflects McVeigh"s motivation for the bombing. I explain herein why I bombed the Murrah Federal Building

Image of the letter

The Outpost of Freedom received from Tim McVeigh, in an envelope postmarked at Terre Haute, Indiana on May 31, 2001, two articles. The first was from editorialist Charley Reese and is titled "Sadly, McVeigh is a typical American in many respects." Mr. Reese discusses the double standard that the US government applies as they kill hundreds of thousands of women and children, with moral impunity, and imposes this same amoral attitude, through the establishment press, upon the American people.

The other was an article from the May 19, 2001, edition of the Niagara Gazette titled "Poem Praises McVeigh." The article proves that McVeigh"s actions have not gone without applause. There are many who have, from early after the bombing, realized that the bombing was not the act of a government gone made, rather an act against a government gone mad.

While serving in Desert Shield, Tim had the opportunity to see the real effect of the might of the US government military forces, and the casual deceit that was a part of the US government war machine. Tim had been aware of a Bradley Fighting Vehicle that had been attacked by, what he was told by his superiors, an Iraqi Hit Team. After returning to the states, he found that the Bradley had been, in fact, a casualty of “friendly fire.” It was bad enough that the government had lied to the soldiers. It was the beginning of an understanding that grew in to contempt for the government.
In an even more startling incident occurred ion February 13. Two thousand-pound laser guided “smart bombs” destroyed the al-Amira bomb shelter in Baghdad. About three hundred people, mostly women and children, were killed in this attack. The government, through its ability to manipulate the press and spin truth into a sort of fantasy, deemed the deaths of the women and children as “collateral damage.”
Tim sent the following story so that others would begin to understand, though from what I have seen, almost all Americans seem to care ONLY if American lives are lost. And, it is against that ‘I don’t care about the rest of the world’ attitude, which is in such conflict with US government’s foreign policies (do as I say, or I will bomb you), that Tim was also speaking against – when he lit the fuse.
Orwell Would Revel in "Collateral Damage"

Tim McVeigh had determined, especially after his time in Desert Shield, that the US government was the epitome of a ‘Bully’. He, like everyone else, knew that you have to stand up to a bully – so he did. His hope was that by striking back at the bully, the bully would be less likely to continue his ways, or even stop bullying, altogether.
Tim believes, and probably rightfully so, that the events in Oklahoma City have caused the US government to change its ways. Consequently, the need for the Citizen’s Militia, which grew out of Ruby Ridge, Waco and other events around the country, has ceased, at least for the time being, to be necessary to maintain. In support of this, Tim has sent the following article for publication: Citing Declining Membership, a Leader Disbands His Militia

Though not provided by McVeigh, this article by Gore Vidal is quite an interesting perspective of McVeigh. It is in PDF format with highlighting of the pertinent parts.

The War at Home by Gore Vidal

One of the items that Tim sent to the Outpost of Freedom was a bit more difficult to deal with. First, a private party wrote it; second, it was a “First Draft”; and, third, it was closing arguments for a trial that never was.

With no other explanation, it was necessary to track down the author, learn what the purpose was and obtain permission to publish the copyrighted document.
Tracing down Robert M. Beattie, Jr., was not so hard. He was outspoken and easy to get along with. He had been in touch with Tim for quite some time, and had been corresponding with him on a fairly regular base. Mr. Beattie explained that he had provided a copy of the ‘closing arguments’ to Tim for his comments; That there was never any intention of allowing publishing of the ‘arguments’. Mr. Beattie is a college professor and is teaching a political science class, “The American Jury.”

Along with teaching the history (yes, the real one) of the American jury process, including both Grand and petit juries, he covers jury selection, criminal, civil. Damage and tort trials. One of the most unique aspects of the class is the moot trial portion – which is conducted around previous trials, though under modified charges and Kansas law. He felt that McVeigh’s trial was ideal for the class, especially in light of the fact that he teaches that the jury should not just be an extension of the government/court. In fact, he used a term I was unfamiliar with, “Jury Independence”, as opposed to the more common “jury nullification.”

In light of the prevailing attitude, throughout the country, towards Timothy McVeigh, it must be understood that Mr. Beattie as also written closing arguments for the prosecutor – as a part of the class. Though I have not, yet, read the prosector’s argument, I have been assured that it is quite harsh in attacking McVeigh’s part in the bombing.

Though reluctant to do so, Mr. Beattie has consented to the publication, by the Outpost of Freedom, of this copyrighted work. His decision is based upon the fact that Tim sent it to the Outpost of Freedom because he felt that it expressed at least some of what he wished to pass on to the American people.

With the permission of the author, Outpost of Freedom presents the copyrighted hypothetical Defense Closing Arguments of the Timothy McVeigh Trial.