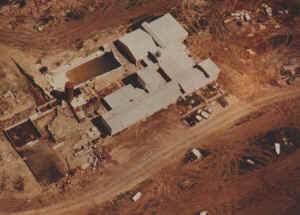 Mt. Carmel Church, during the siege. The "underground bunker" (i.e. storm shelter) can be seen in pretty much the condition it was in on February 28, 1998. The BATF/FBI preferred to characterize the storm shelter as a "secret underground bunker", though the knew of its existence, its purpose and the fact that the roof was being disassemble to create a stringer design.

Behind the parked cars, across the driveway are the remains of the dogs killed on the first day. Was the FBI trying to send the Branch Davidians a message with this exhibit?

Mt. Carmel had become the center of a crime scene which size was nearly beyond comprehension. The primary Checkpoint was only the beginning of an effort to keep people out -- or, to keep people in. 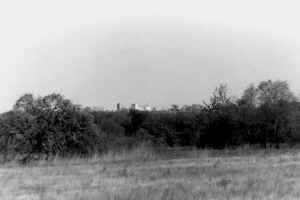 This is a picture of Mt. Carmel during the siege. Although taken with a telephoto lens, the distance was too great to get a very good image, unless... 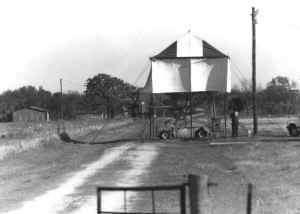 ... you were a major network and could afford to lease land and equipment to cover the story of the year. Of to the left, where the man is facing, is Mt. Carmel Center. The footage shot from this location includes the infamous alleged flamethrowing tank.

Security was high in what became the largest crime scene in America. an area roughly eight mile by four miles was secured, and entry barred. I was told on a number of occasions that I could not enter because it was a "crime scene." The difference remains who was guilty of a crime? The Davidians or the government?

One of the members of the press, working at this tower, ventured down toward the barn. Within minutes, a squad of BATF troopers arrived to secure the area. The press man was chastised and told not to leave the confines of the leased area. 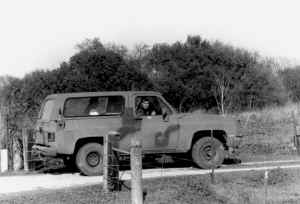 Upon arrival, the BATF seemed to not like the idea of having their picture taken. 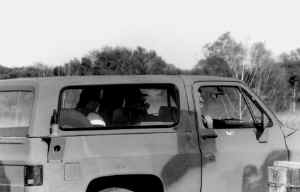 It appeared that we were going to become the object of their visit. Instead, they proceeded to the newsman who had strayed... 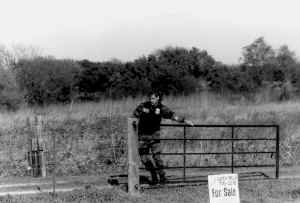 ... and then left as quickly as they had come. 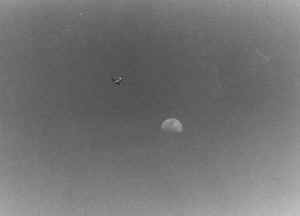 The primary means of perimeter surveillance was the spotter aircraft. This may be the same plane that was outfitted with thermal imagery equipment on April 19.

Further down Old Mexia Road, turn left and then two miles to Mt. Carmel -- however, Texas State Police continue their role as protectors of the crime scene. 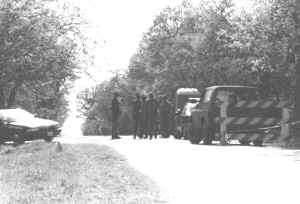 Further East, in a location scouted out by Steve Roberts for the "intervention" (see Waco White Papers) lies Frazer Lane. On April 6, 1993, nearly one hundred people arrived before the government blockaded the entry to this area. From here, just about one half mile West lies Mt. Carmel Center. 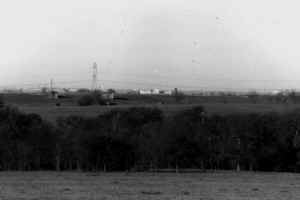 Security, however, was provided at "taxpayer"s " expense. 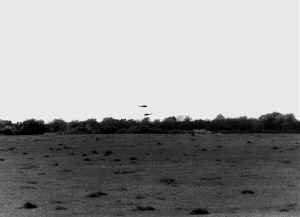 The Outpost of Freedom had come to Waco anticipating returning to Florida within a week. Circumstances, however, compelled me to stay, cover the story and exert whatever effort I might in hopes of achieving a peaceful solution.

Dewey Millay and Steve Roberts had made reservations for me at the New Road Inn. Room 223 became the headquarters for one of the many groups attempting to thwart the governments efforts to "get away with murder."

The flag flew for the first two weeks. Someone complained and the owner insisted it be removed. 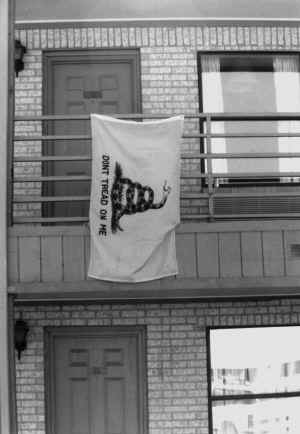 Rosemary, the manager, became somewhat of a secretary as time went by. Over sixty radio talk shows and over fifty phone calls a day, along with research and investigation kept me and the rest of the Waco Team (Dewey, Steve, Mike from Florida and David & Mark from Colorado) busy. Here, I am on one of many phone calls. 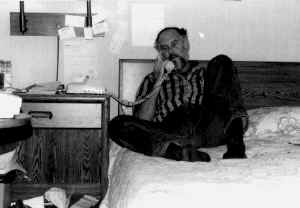 On April 19, just after noon, Rosemary called the room and said, "Gary, put your flag up!"